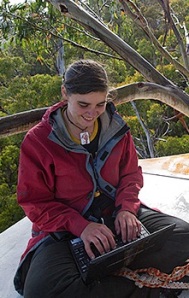 This coming Saturday conservationist Miranda Gibson will bring the forests to town and beam live from her tree top perch to talk to at a family picnic event in Hobart.

The Picnic in the Park, a family day being held on Parliament Lawns on January 28th,  is a celebration of Tasmania’s forests and those working to protect them. Miranda, who has been living in a tree for almost 6 weeks now, is a key note speaker at the event, will participate in a dicussuion group and talk one-on-one to picnicers via a live web-stream.

“Networking Tassie’s threatened forests to the world, from the forests themselves and the ObserverTree is really capturing peoples imagination and this opportunity to talk live to a crowd  via the internet is a new one for the forest campaign and I’m really looking forward to it,” said Ms Gibson.

A large screen will be set up on Parliament Lawns to beam Miranda and her forest protection message into the event.  Other speakers include Greens senator Christine Milne. The event will also feature a series of discussion forums on topics such as conservation science, the forest Intergovernmental Agreement and the politics of freedom. Miranda will also be a participant in one of in these forums.

“It’s been almost six weeks now since I set foot on the ground. I am determined to stay at the top of this tree until the forest is protected. This weekend is a great chance for the community to come together in a celebration of the forests and to discuss the issues surrounding the forest debate in Tasmania,” said Ms Gibson.

The family day will also include stalls, children’s activities, circus, workshops and hot food. The day is being organised by a coalition of environment groups including Still Wild Still Threatened, The Wilderness Society, and Huon Valley Environment Centre.

“The Governments’ failure to protect our forests in line with their Agreement points to an even more urgent need for the community to work together and help hold them to account. People need to see meaningful forests protection if the much-anticipated peace in the forests is ever going to be realised and this will be my main message to the Picnic in the Park,” siad Ms Gibson.

Posted on January 24, 2012, in Media Releases. Bookmark the permalink. 3 Comments.