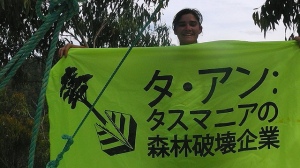 Conservationist Miranda Gibson has today written to the Japanese corporate customers of Ta Ann to inform them of the 70 actions that took place last week in support of Tasmania’s forests. Miranda Gibson has spent the last 10 weeks at the top of a tree in forest that is threatened by logging in order to supply wood to Ta Ann.

“Today we are sending a clear message to Ta Ann’s Japanese corporate customers and asking them not to purchase wood sourced from our precious high conservation value forests. Last week, over 70 actions took place in 15 countries around the world in support of Tassie’s spectacular forests” said Miranda Gibson.

“Today Bryan Green is meeting with Ta Ann’s Japanese customers. If the Tasmanian government had taken real action to protect native forests, then Bryan Green would be able to reassure those companies today. However, as long as Ta Ann continue to destroy native forests and to lie about their products there will be instability in the market” said Ms Gibson

“We fear that Bryan Green’s efforts today are a further attempt to cover up the lies of Ta Ann. Our correspondence with these companies today is bringing to their attention the fact that the international community know the truth about Ta Ann and will not accept Ta Ann’s ongoing role in native forest destruction.” said Ms Gibson.

Actions are set to continue in Tasmania and around the world to highlight Ta Ann’s role as the driving force behind Tasmanian forest destruction.

Posted on February 24, 2012, in Media Releases. Bookmark the permalink. 1 Comment.