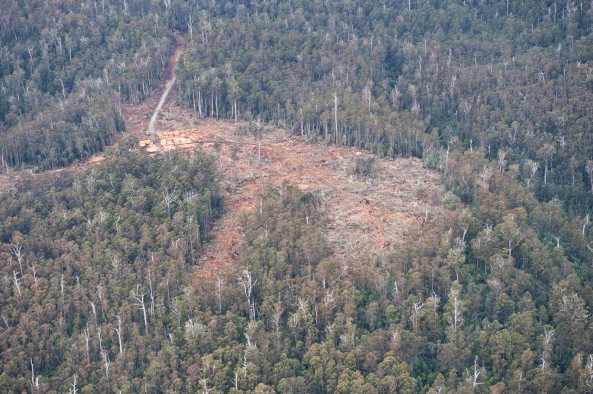 Logging coupe PC015B, located in the Picton Valley, southern Tasmania, is an area of forest that has been logged over the past few months. This forest, and the old growth ecosystems surrounding it, could have been protected under the promised moratorium and conservation agreement.

In June 2011, a new 2.6 km logging road was pushed into a remote tract of old growth forest, which enabled the logging industry access to this section of the Picton Valley throughout the duration of a promised moratorium.

In September 2011, logging commenced in these old growth Eucalyptus delegatensis forests, which are part of a large tract of remote wilderness forest contiguous with the Hartz Mountains National Park and the Tasmanian Wilderness World Heritage Area (TWWHA).

Tasmania’s Intergovernmental Agreement on Forests was signed on 7 August 2011, and one month later Forestry Tasmania continued to schedule logging in forests that were identified as being in need of protection. PC015B was primarily targeted by Forestry Tasmania to supply wood for Ta Ann.[i]

However, there is still time for the remaining forests in this area to be protected, as logging was suspended due to the logging road being too ‘green’, meaning it made it too difficult for the loggers and log trucks to access these forests.[ii]

Our organisations made public pleas for these forests to be protected as part of the ‘forests negotiation process’, as logging in this area had not commenced when Giddings and Gillard promised the immediate protection of these forests within the ENGO nominated 430 000ha.

The ecological consequences of the logging of these old growth forests are significant, contributing to a global loss of native forests, pushing wildlife to the brink of extinction and contributing to climate change.

The Picton Valley, along with the Weld and Huon Valleys, are considered to possess important natural and cultural heritage values that relate particularly to the World Heritage values of the adjoining Tasmanian Wilderness World Heritage Area. In particular, these lands contribute a new complementary ‘lowland’ or lower valley manifestation of attributes already within the TWWHA, for example glacial, karst, tall eucalypt forest and rainforest.[iii]

CLICK HERE to take action now for the magnificent forests of the Picton Valley and other high conservation value forests across Tasmania.