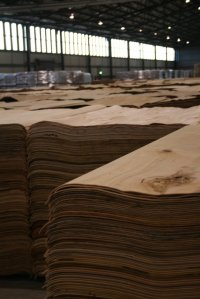 Conservationists are today calling on timber company Ta Ann to provide details of their trials of lower quality, smaller and plantation logs that were held in June. As Federal Minister Tony Burke returns to Tasmania this weekend in an attempt to finalise the forest negations, the question of Ta Ann’s future role in native forest logging remains unanswered.

Tasmania’s Forest Minister Bryan Green announced in June that Ta Ann was conducting trials in smaller and lower quality peeler logs. Green stated at the time that a permanent change at the Ta Ann rotary veneer mills could free up forests for reservations under the state’s forest talks to reduce native forest logging.

The Huon Valley Environment Centre and Still Wild Still Threatened are seeking an announcement by the Malaysian timber company about the results of these trials, as they hope that the company has found a way to use wood supply from plantations and we expect forests to get protected

“Ta Ann’s wood supply demands have stood in the way of forest protection. They company’s continued utilisation of wood sourced from high conservation value areas was identified as a key driver for ongoing logging in the proposed forests, logging was not rescheduled out of these areas. The result of which has been the destruction of vast areas of independently verified national and world heritage value forests” said Jenny Weber of the Huon Valley Environment Centre.

Forest in the Picton Valley: logged recently to supply wood to Ta Ann.

“A rapid transition out of native forest destruction is the only way for Ta Ann to give their Japanese customers the type of eco-friendly wood they have already claimed to be providing. Ta Ann have conducted trials of alternatives, yet the results have not been released to the public,” said Jenny Weber.

“The protection of Tasmania’s world class forests relies on Ta Ann ceasing to source wood from the destruction of these areas. Our organisations are eager to hear the results of the trials and to know Ta Ann’s plans for their future products” said Miranda Gibson of Still Wild Still Threatened.

“The Tasmanian public and the customer companies should be informed about the progress Ta Ann is making to a rapid transition out of native forests. Without a rapid transition there will inevitably continue to be controversy in the global market in relation to their products” said Ms Gibson. 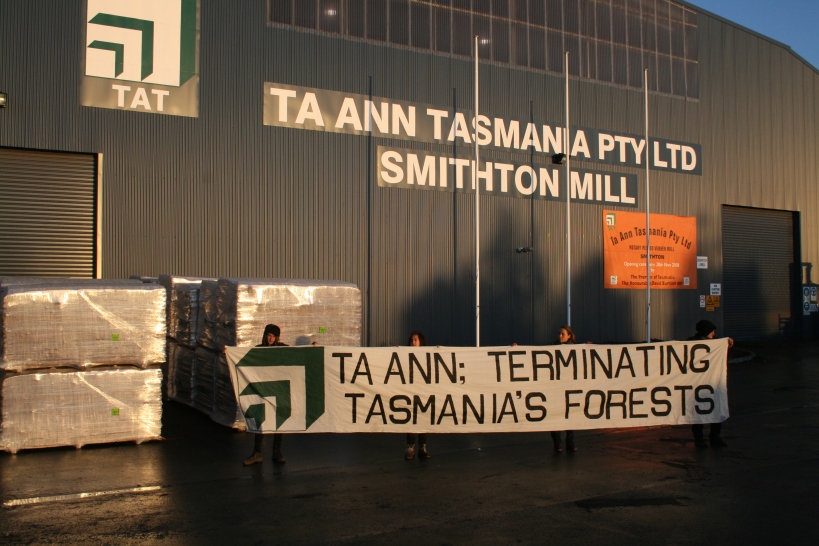 One of the many protests at Ta Ann’s veneer mill: calling for an end to the destruction

Posted on October 27, 2012, in Media Releases. Bookmark the permalink. 1 Comment.