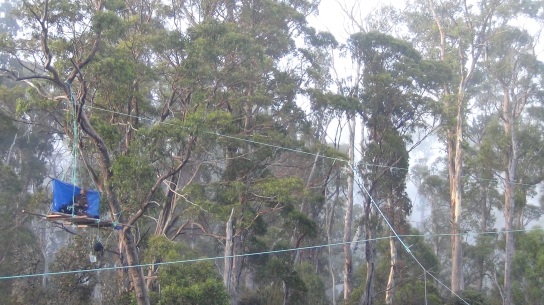 Today conservationists from Still Wild Still Threatened successfully halted logging operations for the day in the Butlers Gorge forests. One conservationist remains locked onto the gate, blocking access to the logging road that leads to three separate logging coupes in the area. Another protester remains in a tree sit.

“Today’s peaceful action has not only held off logging, giving reprieve for the forests of Butlers Gorge, it has highlighted the complete hypocrisy of the Australian Government who are allowing logging to continue in areas they have nominated for World Heritage protection” said Still Wild Still Threatened spokesperson, Miranda Gibson.

“Tony Burke is failing Tasmania’s forests. The nomination made by the Australian Government to protect these world-class forests could have been something to be proud of. Instead it is now tainted with the ongoing destruction of some of Tasmania’s most spectacular wilderness areas” said Ms Gibson.

“Tony Burke’s recent assertions that the forest wars are almost over is ignorant of the reality faced by these forests everyday, which is an onslaught of logging in some of Tasmania’s most contentious forests. Tasmania’s forests are not at peace; they are being decimated by the logging that Burke is allowing to continue unabated in areas he has nominated for World Heritage. It is absurd and unacceptable” said Ms Gibson

“Despite Burke’s clear failure to protect the values that his government has recognised in these forests, he has the gall to claim that the Greens are not standing up for the environment. While the Burke has been turning a blind eye to the logging going on in the forests he nominated to the IUCN for their World Heritage values, Christine Milne the Leader of the Greens was here with me, in the Observer Tree, seeing first hand the values of these irreplaceable forests. I would like to invite Tony Burke to do the same” said Ms Gibson.

“We are calling on the Australian Government to immediately withdraw all logging operations from Butlers Gorge and to ensure no new logging coupes are started within the World Heritage nominated forests” said Ms Gibson.

Posted on February 20, 2013, in Media Releases. Bookmark the permalink. Leave a comment.