Guest Blog: The Tale of Two Forests by Geoff Law 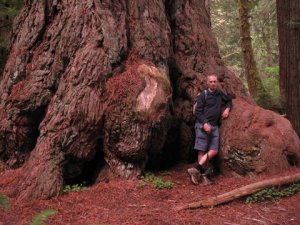 It was late evening and there was no one else on the track. A thick, misty drizzle drifted through the tree-tops, obscuring the highest limbs. At ground level, water dripped on my raincoat from the dense tangle of shrubs and small trees crowding the track with their small leaves. Occasional open patches of ground were a carpet of ferns. Golden-brown leaf-litter cushioned my feet as I moved from one immense tree-trunk to the next.

The trees were huge and clearly very, very old. Some were almost impossibly gnarled, others were arrow-straight, shooting upwards towards the dim, complex canopy high above.

I was in a forest of redwoods – Sequoia sempervirens – in northern California. My trip there was funded by the Winston Churchill Memorial Trust, allowing me to look at unique forests in the USA, Europe and Japan. The Californian redwoods were the obvious place to start. These are the world’s tallest trees, their top-most fronds up to 115 metres above the ground. They are highly celebrated and one of the most spectacular living environments on planet Earth.

Spectacular landscapes of the Tasmanian Wilderness include rugged mountain ranges cloaked in delicate alpine and sub-alpine flora and scattered with picturesque tarns; expanses of buttongrass moorland; some of the world’s tallest flowering forests; and extensive karst systems containing glow-worm displays.

So says the Australian Government’s ‘statement of outstanding value’ pertaining to the Tasmanian Wilderness. The technical document goes on to say:

The property contains examples of the world’s tallest flowering forests. These eucalypt forests tower above rainforest trees of substantial stature, forming awe-inspiring forests of truly exceptional beauty at both a landscape and individual scale.

Many Tasmanians have experienced these qualities at first-hand, on trips to giant trees in valleys such as the Florentine, Weld, Arve and Huon. These include the tallest hardwood trees on Earth, with trees up to 99 metres tall and six metres in diameter. Paradoxically, most of these oldgrowth forests are not protected. They occur outside the TWWHA, along its eastern fringe. Even the world’s greatest concentration of giant trees – those of the Styx valley – stand outside the TWWHA. Evocatively-named giants such as Icarus Dream, the Chapel Tree, Damocles, Medusa and Gandalf’s Staff occur in small reserves that are hemmed in by logged areas. Other big trees that do not meet Forestry Tasmania’s restrictive criteria for protection are ear-marked for logging.

And that’s another another quality shared by the redwoods and Tasmania’s ancient eucalypts – the severe diminution of their range by logging. According to the respected Save the Redwoods League in San Francisco, only 5% of the original area of redwoods remains as oldgrowth. In Tasmania, only 11% of our original Eucalyptus regnans forests (the world’s tallest flowering plant) remain as oldgrowth. Of that original cover of E. regnans, only 3600 ha (3.6%) is to be found within the TWWHA.

In the USA, most of the remaining oldgrowth redwood forest is protected. There is virtually no oldgrowth on public land available for logging.  In Tasmania, however, nearly half of that remaining E. regnans oldgrowth is still threatened by logging – almost all of it on State Forest managed by Forestry Tasmania. Trees that are protected mostly occur in small, scattered strips and scraps of forest along streams or on steep slopes in areas otherwise dominated by logging. The figures for other tall-eucalypt species, such as Eucalyptus obliqua (‘stringybark’) and Eucalyptus delegantensis (‘gum-topped stringybark’), are similar.

The plight of our wonderful tall-eucalypt forests has driven campaigns to protect what’s left. Paper companies in Japan have been implored not to consume Tasmanian woodchips from native forests. The consumers of plywood produced by Ta Ann (which has mills in the Southern Forests and on the edge of the Tarkine) have been told of the impacts of extracting the company’s logs on oldgrowth forest and wilderness. Protests in Harvey Norman’s shops have focussed on the impacts of logging Tasmanian tall-eucalypt forests and the resultant destruction of wildlife habitat.

And on Mt Mueller, Miranda Gibson keeps vigil 60 metres up the ObserverTree – a  huge Eucalyptus delegatensis in logging coupe TN044B, whose steeply forested slopes are due for cable logging within the next two months.

One of the objectives of Miranda, of Still Wild Still Threatened, and of other conservation groups is to extend the TWWHA to incorporate adjacent tall-eucalypt forests. In September 2009, Senator Bob Brown launched a report prepared by me which proposed a World Heritage Area occupying some 33% of Tasmania (2.2 million hectares). It would include the Tarkine rainforests and coastline; the Great Western Tiers; the moorlands, mountains, lakes, rivers and rainforests of parts of the west coast; Recherche Bay; Melaleuca; and the giant trees of the Styx, Weld, Florentine, Counsel and upper Derwent valleys.

Our current World Heritage Area (1.4 million hectares, or 20% of Tasmania) is a major economic contributor to Tasmania. Consulting firm Gillespie Economics has estimated that the TWWHA creates over 5000 Tasmanian jobs and $200 million per annum of revenue to Tasmania. Extension of the TWWHA would boost these numbers.

Developing these economic opportunities requires additional tourist infrastructure. Walking tracks and a visitors centre in the Styx Valley could help create a southern-hemisphere counterpart to the famous Redwood National Park in California. Additional facilities, tracks and services for visitors could also be established in the upper Florentine, next to the road to Strathgordon. Such development, if carried out sensitively and marketed professionally, would be a great economic boost to the Derwent valley, including towns such as New Norfolk, National Park and Maydena.

Rehabilitation of some logged areas and the closure and re-vegetation of redundant logging roads is also required. Globally, this is nothing new. When Redwood National Park was extended in the 1970s, over one third of the redwood forests within it had already been utterly devastated by logging. In this unstable and tectonically active landscape, the National Park Service had no option but to restore the contours of the land and the natural species-composition in order to minimise siltation and erosion. This world-leading project is still occurring today. In Tasmania, it need not be done on such a large scale, but there are certainly many logging roads into sensitive areas of the Styx, Weld and Florentine that are ecologically destructive and will soon be surplus to requirements.

Achieving this vision requires political will. Where the murky processes of the Tasmanian Intergovernmental Agreement (‘the IGA’) will lead is anyone’s guess. Meanwhile, the IGA is being flouted as logging continues within the tracts of oldgrowth forest that Prime Minister Gillard and Premier Giddings pledged to protect – including the Mt Mueller forest that has become Miranda’s home. Hope for these forests, and for an extended Tasmanian Wilderness World Heritage Area, rests with those who love these places. Let’s all support Miranda, Still Wild Still Threatened and the ObserverTree so that their message can be conveyed to the rest of the world.

Then our tall-eucalypt forests can enjoy the same protection and reverence as California’s statuesque oldgrowth redwoods and become a great international drawcard for Tasmania.

Geoff Law has been a wilderness conservationist in Tasmania for over 30 years.He was a full-time volunteer in the landmark Franklin River campaign. He was then the Tasmanian Campaign Officer for the Australian Conservation Foundation, helping to stop the Wesley Vale pulp mill and Huon valley woodchip mill, and worked on campaigns that created the Douglas-Apsley National Park and extended the Tasmanian Wilderness World Heritage Area to include significant tracts of tall-eucalypt forest. From 1999 to 2008, Geoff was involved in coordinating campaigns to protect oldgrowth forest and working to stop Gunns’ proposed pulp mill, through his role as Tasmanian Campaing Manager for The Wilderness Society.  Geoff was of the “Gunns 20”;  being sued by Gunns for their work on the forests campaign. He has also worked on environmental issues for Senator Bob Brown, producing a report in 2009 proposing extension of the Tasmanian Wilderness World Heritage Area. Geoff has been arrested several times protesting in Tasmania’s threatened wilderness areas. In 2008, Penguin published his entertaining recollections of the Franklin River campaign in his book ‘The River Runs Free’. In 2010, he worked on Indonesian forest issues from the Javanese city of Yogyakarta. In 2011, he travelled to World Heritage forests in the USA, Europe and Japan under a Churchill Fellowship.

Posted on January 7, 2012, in Guest Blog. Bookmark the permalink. 4 Comments.