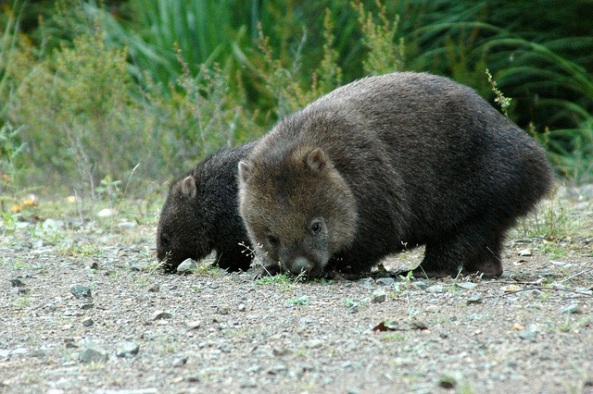 While conservationists were visiting the Picton forests, this mother wombat and her baby walked out of the threatened forests of PC072B. Image by Laura Minnebo

Logging coupe PC072B is situated in an old growth forest adjacent to the Tasmanian Wilderness World Heritage Area (TWWHA) that runs down slope to the Picton River. The area of forest is potential habitat for the masked owl, Tasmanian devil, Tasmanian wedge tailed eagle and grey goshawk.[i]

Sadly the history of coupe PC072B, located on the East Picton Rd, where a long history of protests to protect the globally significant values of these forests, have failed to stop the destruction of these ecosystems. PC072B is located in a region of 2150ha of forest that were once protected as a national park.[ii]

The Hartz mountains, proclaimed as a scenic reserve in 1939, were protected within a National Park in 1952. At the time, the seemingly endless supply of timber in the southern forests enabled the logging industry to graciously concede the magnificent forest stretching up the flanks of the Picton River. However, by the mid-1970s, logging roads had extended further and further up the Huon and Picton River valleys and by 1977 the road along the east bank of the Picton River was at the Park Boundary.[iii]

In 1976, after a long court battle, during which conservationists fought the mining industry from accessing the wilderness area at Precipitous Bluff, a final decision was granted that the inclusion of Precipitous Bluff in the Southwest National Park was made conditional on the revocation of forested land in the Hartz Mountains National Park.[iv] PC072B and the large tracts of forests on East Picton Rd were the victims of this decision, where wilderness areas and ancient ecosystems are compromised in the interests of environmentally destructive interests.

These forests now have the opportunity to be granted secure legislated protection, and the protection of the forests of PC072B and the other areas in the Picton Valley, which you have read about over the past month, may be protected as an extension to the Tasmanian Wilderness World Heritage Area.

The Picton Valley has experienced various episodes and scales of glaciation with evidence of glaciation extending almost to the confluences of the valley.[vi]

The Picton Valley, along with the Huon and the Weld Valleys, is one of the few areas in Tasmania where there is a major concentration of tall eucalypt–rainforest ecosystems and where the forests are mostly intact with potential for ongoing natural processes to operate. Notwithstanding that some parts of the forests have been subject to industrial-scale logging operations, the combination of the intact forests and the option of being able to naturally rehabilitate the logged areas, means the ‘Three Valleys’ forests still offer outstanding potential for conservation, including maintaining natural processes.[vii]

CLICK HERE to take action now for the spectacular forests of the Picton Valley, and for high conservation value forests right across Tasmania.

[ii] Gee, H., The East Picton, the infamous Precipitous Bluff-Hartz swap, in For the Forests, A history of Tasmanian Forest Campaigns, p.187